Throwback Thursday: MU 1977 vs. Team That Made Even Bigger History

Halfway between a heartbreaking loss and perhaps the toughest game of the year seemed like a good time for a Throwback Thursday match-up in my 96 team tournament using the Value Add Basketball Game.

As much history as Marquette made in 1977, after defeating Utah the drew the team that made the ultimate history in the second round. Texas Southern won the 1966 national championship with the first all Black starting line-up by fittingly defeating Rupp and Kentucky from the segregated SEC.

The first thing I saw when laying out the player cards was that his was the ultimate defensive battle in my tournament to date. The cards are adjusted by era and level of competition faced, and these rates two of the toughest defenses from among the 96 great teams in the tournament but with good but not great offenses. 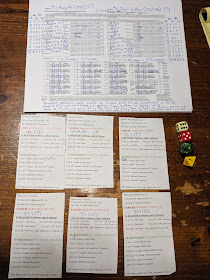 I write up the simple box score by the players after tracking plays on the scoresheet. By those numbers and the running score (if you stretch out the photo above) you will see that despite Jerome Whitehead and Bo Ellis combining for 25 rebounds, everyone on the Texas Southern team forced missed shots and grabbed rebounds on both ends of the court for my tournament high 46 rebounds to 35 for Marquette.

Just when they started to pull away, taking a 45-37 lead with 10:55 with points very hard to come by, Ellis (11 points, 12 rebounds) started a long rally with an offensive rebound, basket and foul drawn followed by a hit free throw.

While both teams continued to brutally stop almost every half court set the rest of the game, Butch Lee (19 points, 5 steals) started four fast breaks off of his steals in the final 10 minutes, the last one a steal and fast break bucket to finally give MU a 53-52 lead with less than a minute to play.

However Orsten Artis scored the game-winner for the Texas Southern 54-53 win, to give him 10 points. If he had missed and Marquette grabbed the rebound, the Marquette would have won and no player on the balanced Texas Southern team would have hit double figures.

Texas Southern, which would later become UTEP, advances to play the winner of Kawhi Leonard's San Diego State and of 2011 and a Big East team Marquette knows all to well, the 2013 Louisville national champs. I track all results at www.pudnersports.com. Here is the entire West Region bracket. 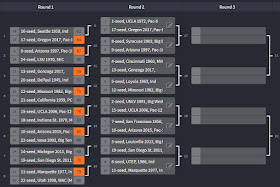