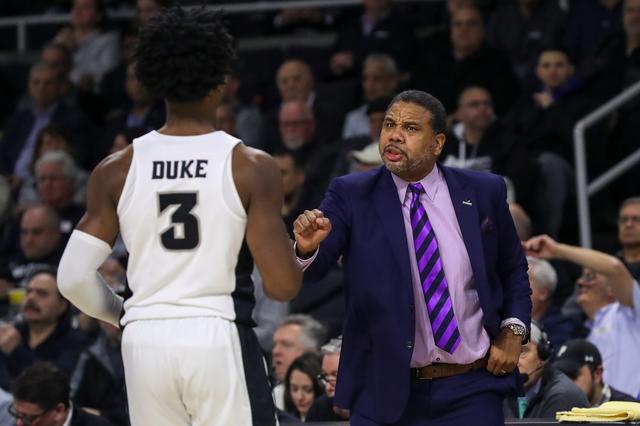 2019-20 was a yo-yo season for Ed Cooley's Friars. They started the season 6-6 with four sub-100 losses and a pair of drubbings by the only teams of relative quality (Rhode Island & Florida) they faced. According to T-Rank, they were the 124th best team in the country during that period. Then an upset over Texas keyed a 5-1 stretch that had them near the top of the Big East and playing like the 16th best team in the country. They couldn't keep that up and dropped five of seven, looking like a bubble team as the 41st best team over that difficult stretch. Then, over the final six, they went a perfect 6-0 and during that period were the #1 team in the nation according to T-Rank. Through it all, Alpha Diallo was the consistent leader, but it was transfer guard Luwane Pipkins playing like a borderline All-American (14th nationally in PORPAGATU!), posting at least a 107 adjusted offensive efficiency and 28+ minutes in every game down the stretch. Now both Diallo and Pipkins are gone, as are a trio of key role-players in Kalif Young, Maliek White, and Emmitt Holt.

Cooley's offense is best when he has a dynamic point guard. Players like Vincent Council, Bryce Cotton, and Kris Dunn laid the groundwork for what Pipkins became at the end of last year. This season the keys will likely be in the hands of Jared Bynum, a transfer from St. Joe's who averaged 11.3 ppg/4.5 apg as a freshman. Bynum struggled against top-50 opponents but is expected to get the first chance at running the show. The wings are the strength of this team. Duke and Reeves were both top-50 recruits who have shown the ability to come up big before. Up front, Horchler was a double-double machine for North Florida who remained productive when he faced top competition while Watson is a proven productive and efficient contributor on both ends of the floor. Off the bench, Syracuse transfer Brycen Goodine is a former top-100 recruit who is immediately eligible if Bynum isn't able and the Friars have a wealth of long, athletic wings and forwards led by Greg Gantt that give Cooley depth and options.

Offensively, Cooley's teams used to always run through one point guard. Vincent Council, Bryce Cotton, Kris Dunn, and Kyron Cartwright all had top-5 national assist rates in their careers. The past two years, it's been more of a committee approach. They have one regular post player, currently Watson, and everyone else is focused on moving the ball for the best shot. Cooley has generally played at a medium pace, but last year they were racing out of the gate and were #67 (72.8 possessions per game) in tempo through the first 12 games, with a poor 6-6 record to show for it. Previously, Cooley's fastest tempo (and only top-150) was the 2015 team that ranked #129 nationally. The rest of the way they slowed it down, playing at the #243 tempo (67.2 possessions per game). Dropping possessions by 5.6 per game is a massive shift and unquestionably deliberate, and the Friars improved dramatically because of it. While their offense did improve as the season went on, it was the defense that was their calling card. Providence is primarily a man defense that uses its length at virtually every position to suffocate smaller opposing guards and force mistakes. That length also allows them to succeed in zone (they use more zone than any other Big East team, albeit only 20% of the time) which means they have the ability to mix defenses and with their length and athleticism throw a variety of looks at opponents.

Like most Big East teams, this is a hard one to project. While they lost a ton from last year, the team was actually better from an efficiency perspective without Diallo. Pipkins, at least how he played late, might be the bigger loss. Still, this team has the athleticism and length to keep up Cooley's consistently efficient defense and there's a lot of offensive talent. It will likely take time for the offense to come together, but Cooley has already had a year to work with Bynum while Duke has breakout star written all over him. This has the feeling of a comfortable NCAA Tournament team. In this year's Big East, that could mean a finish anywhere from second to fifth, but I tend to think this is a team better situated to capitalize on their upside because they have the defensive consistency to stay in most games and enough offensive playmakers to keep up.

Marquette Memory: Providence games are known to feature odd events and one of the most notable was on January 17, 2009. In a game at the Dunkin' Donuts Center, Providence guard Jeff Xavier drove to the rim and drew contact from Joe Fulce. Xavier went down with a scratch near his right eye and the game seemed ready to carry on until a fan came down from the stands, climbed over the Providence bench, and took to the court to confront one of the officials. Security quickly took the fan into custody and escorted him from the court. Marquette coach Buzz Williams said after the game "I told the officials, 'We'll leave, because that's extremely dangerous. I saw the guy coming out of the stands. Forget the game; I'm going to protect the guys. I'm going to protect those guys no matter what." It's a good thing Williams and his team stuck around as Marquette rallied from a 13-point second half deficit for a 91-82 win over the Friars. The fan turned out to be Jonathan Xavier, the brother of the Providence guard. He was charged with disorderly conduct for the incident.