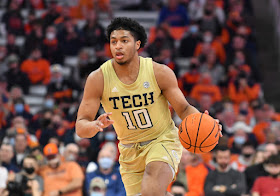 Deebo Coleman needs to jump from role-player to star

There was optimism in Atlanta after Mark Pastner won the 2021 ACC Tournament and brought the Yellow Jackets to the NCAA Tournament for the first time in his tenure. Opening 2021-22 with a buy game loss wasn't the best start. Things never really got right for this team, as they lost all their significant non-conference games and staggered to a 5-15 ACC record even in a down year for the league. From that team, Pastner loses his top-two scorers and finds himself with a worse roster on paper than the team that gave him the worst record of his career.

Georgia Tech optimism will be tied to their returnees. Deebo Coleman and Miles Kelly are promising sophomores who flashed ability last year but were rutted in inconsistency. In the back court, Kyle Sturdivant was consistently solid but not spectacular while Deivon Smith has raw talent but similar inconsistency to the now-sophomores. The man to watch may be Rodney Howard, who has the frame to be a dominant interior player, but is too foul prone (fouled out of four straight games in February) and not very assertive on offense. They will hope to get additional contributions from sophomore Jalon Moore as well as transfers Lance Terry and Javon Franklin, two up-transfers that averaged double-digit scoring at their previous stops.

Settling on an offense has been a struggle for Pastner at Georgia Tech. Whereas his best Memphis teams played fast, moving the ball well and attacking the interior with reckless abandon, he hasn't found that to be as easy in the ACC. The 2021 team with two NBA players in Jose Alvarado and Moses Wright is the only top-150 offense he's had in six seasons. Erratic pace, failure to adapt to the perimeter-oriented shift in the game, and a lack of talent are issues. Last year, they were a team unwilling to shoot the three, poor at shooting inside, and unable to get to the line. That wasn't a recipe for success. They likely need to turn up the pace as they do have some promising young players, but that could lead to a turnover-prone team (sub-200 in five of Pastner's six seasons in Atlanta). Where they are consistent is the defensive end. Pastner's teams are great at challenging and blocking shots, limiting opponent eFG% while mixing in a heavy dose of zone looks. With most of the key pieces being in the system for the second year, look for defense to be what keeps them in games.

After last year, expectations aren't high for this outfit. If Coleman can make a star turn and Rodney Howard can finally use his size effectively, there's reason for optimism, but by and large what returns is a group of lower usage, inefficient offensive players that will have to turn games into rock fights just to have a chance. And teams that try to grind out games tend to do best when they can convert the three. While Georgia Tech might have a few capable shooters, Pastner hasn't had a team in the top-200 of three point attempt rate in more than a decade, so what's more likely is a team that grinds opponents down defensively but doesn't have the offensive chops to get the job done. As fun as the 2020-21 team was in winning the ACC Tournament, it was Pastner's only tourney berth and only top-60 kenpom finish in the past 8 seasons, including his entire tenure at Georgia Tech. If he can't turn this bunch into a competitor, don't be surprised if he's on the hot seat come March.

What We've Learned: Gardner-Webb transfer Terry has started every game, with Kelly serving as a multi-positional reserve. While Marquette has had trouble with physical bigs like Howard, he's been awful this year, with more turnovers (5) than points scored (2) against D1 competition. The Yellow Jackets have been running out an undersized lineup, frequently playing a three-guard back court with no one taller than 6'7" on the floor. They have been miserable shooting the basketball, ranked #344 in eFG% and sub-300 in each individual shooting component including free throw percentage. Defensively, they look better, but that might be luck. While they have the 12th ranked eFG% defense, that's mostly because opponents are shooting just 22.7% from deep against them, which is dragged down with two of their three opponents ranked sub-340 in 3PFG%. This should be a get-right game for Marquette.

Marquette Connection: In 1999, current Georgia Tech assistant coach Julian Swartz was a household name among Wisconsin high school basketball aficionados. The Waukesha South star capped off his career with a State Player of the Year trophy in his third consecutive all-state selection. He enrolled at UW-Madison and was a reserve on Dick Bennett's 2000 Final Four team. But what those aficionados didn't know was that Swartz was dealing with a powerful obsessive-compulsive disorder that led him to leave Madison after just one season. He returned to Waukesha and enrolled at Carroll College, serving as an assistant coach at Waukesha South. After graduating from Carroll, he went to Marquette, serving as a graduate assistant for Tom Crean on a number of NCAA Tournament teams. He also worked with the West Allis/West Milwaukee school district, developing social emotional learning techniques, before committing to basketball full-time when he went to work with Josh Pastner at Memphis. Marquette's College of Education awarded him with the Counselor Education and Counseling Psychology Achievement Award in 2016. If Marquette faces Georgia Tech in Fort Myers, it will be the first time Swartz has coached against his grad program alma mater.