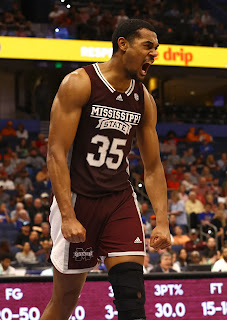 Fresh off an NCAA upset win over UConn, Chris Jans takes over what would have to be considered a disappointing seven years in Starkville for Ben Howland. Last year's team flirted briefly with the bubble, notching wins over a trio of NCAA teams in Richmond, Alabama, and Arkansas on their way to a 13-5 start, but went just 5-10 the rest of the way, losing to Virginia in the NIT first round. While they lost flashy guard Iverson Molinar and productive big man Garrison Brooks, Jans does have some returning talent and incoming options.

Shakeel Moore and DJ Jeffries were expected to be big impact transfers, and while both showed flashes of promise, their seasons were erratic and both saw their efficiency drop off late in the year. Some of the backcourt pressure should be relieved for Moore as transfer Dashawn Davis was a prolific distributor for Oregon State. Tyler Stevenson joins the squad from Southern Miss and put up impressive raw numbers for a bad team. Tolu Smith is the guy Jans will hope anchors the team. He posted double-digit scoring in their last 7 games last year, with three double-doubles in there. He's a physical big that can be a game-changer, but had four stretches where he missed multiple games with injury last season. The bench will feature a transfer trio in Eric Reed, Jamel Horton, and Will McNair. The former two will help stretch the floor and provide back court depth while McNair follows Jans from New Mexico State and projects to be a rotational big with Stevenson and Smith.

Jans' strategy at Mississippi State will likely be similar to what he did with the Aggies, where he was a master of bringing disparate pieces together and molding them into a team. That got him results as he won 25+ games in four of his five seasons in Las Cruces, with the only exception being the COVID-shortened 2021 season. How did he do it? First, his teams pound the glass. Rebounding is a team effort and guys like Smith, Stevenson, and McNair are the kind of bodies that Jans wants to keep the boards clean. On offense, they will slow the pace and take a high volume of threes. While this team has guys willing to play the shooter role, they haven't shown to be particularly good at shooting. Reed and Horton give them some long-range ability, but they are the only players on the roster to crack 32% from deep last year and neither hit 36%.

So what will Mississippi State be? If Jeffries plays like an NBA talent, if the back court can settle down and play efficiently, if Smith is healthy, and if they hit threes, this team could challenge for an NCAA berth. But that's a lot of ifs and a lot of coming together in a short time. Jans has done it before and he's great at molding collections of players into teams, but they are vulnerable in non-conference play. If you exclude the COVID outlier season, his teams went 110-24 in four seasons, and eighteen of those twenty-four losses were to non-conference opponents. Part of that was playing in the WAC, but part of it was also his teams tending to get metrically better as the season went on. This game might be the best non-conference measuring stick for Marquette's future. This is a neutral site game against another team that is being overlooked early on but has NCAA upside. Winning this could go a long way in March.

What We've Learned: The Bulldogs have only played four buy games, but they have quietly been one of the best teams in the country. On kenpom, they have shot up from #53 to #27, which is a 26-spot improvement. That's mostly because of their defense. MSU is allowing a stingy 0.71 points per possession, fourth best nationally. The key to that has been Cameron Matthews, who was a rotation player last year and has turned into a high-level shot blocker and turnover generator, ranking top-100 in block and steal rates. Defensively, they have grinded teams down to a slow pace and dominated them physically. Offensively, they've been fine in most aspects but Matthews and Tolu Smith have been elite on the glass giving them many second chance opportunities. They haven't taken a ton of threes, which is a positive for a team that isn't shooting it well. Look for both teams to apply a lot of pressure (MSU is also #1 as a team in steal rate) with the biggest difference being the pace they want to play at. One key factor may be the health of Dashawn Davis, who picked up an ankle injury in their opener and is now listed as day-to-day. This will be another really good test and strong litmus test for Selection Sunday.

Marquette Connection: There has only been one prior meeting with the Bulldogs, and it was a whomping. The teams met in Maui in 2012 the day after Rotnei Clarke tore Marquette fan hearts out. Vander Blue led the way as Marquette took out their frustrations on Mississippi State, opening the game with a 25-9 run on their way to an 89-62 rout. Blue's 18 points and a 15/12 double-double from Davante Gardner paced Marquette in the victory. That team went on to win the Maui consolation bracket and later took revenge against Butler in the NCAA Tournament on their way to the Elite Eight.